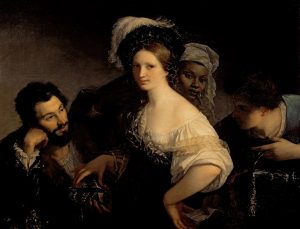 Once upon a time, courtesans were considered “the power behind the throne.” Throughout Europe and even Asia, courtesans not only offered to sexual delight to men of power, they were socially accepted companions who were better known for their intellect, wit, style, and charm. They were afforded opportunities that other women were not allowed, such as owning land and accumulating wealth. Heck, one of them, Theodora, was even sainted. Today, we crudely dismiss these women as prostitutes.

In Venice, there was a courtesan of a special variety, Le Cortigiana Oneste (the honored courtesan.)

A woman who occupied the profession of “La Cortigiana Oneste,” or “Honored Courtesan” was not to be confused with an ordinary prostitute. The ability to bring pleasure to her patrons was only one of her many skills, perhaps less important than her wit, charm, intelligence, high level of education, knowledge of politics, fashion sense, beauty, and, of course, her mastery of the realm of imagination. To capture the attentions of a wealthy patron, she needed to cultivate an aura that would encourage him to consider her his equal, and therefore be deemed worthy to occupy the role of his most compelling love object. She achieved this goal through her many virtues. In exchange, the courtesan enjoyed far greater power, freedom and knowledge than the typical Venetian wife. (source)

I consider myself a new age courtesan. I am a provider of fantasy and illusion. I provide eroticism to some that have no other way to seek it out in their public lives. Beyond that, I’m a friend, counselor, and sounding board. I’m a keeper of secrets. I’ve been regarded for my intellect and wit. I spend a lot of time advising men of power and influence.  That’s not me tooting my own horn. That is the life of a hypnodomme. Don’t believe me? Ask one.