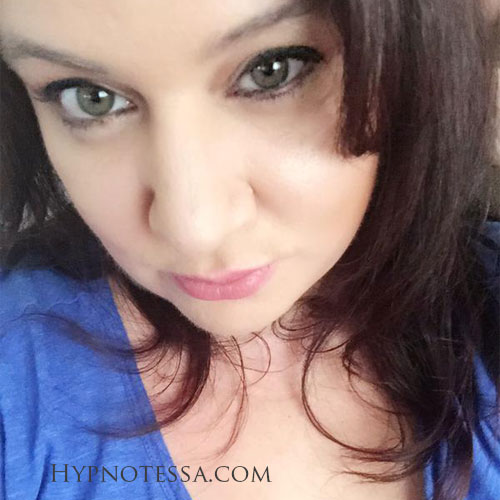 Well, it is that time of year again…my birthday (September 29th)! September has been affectionately nicknamed Tessember by one of my boys and I love it. It just makes sense that a goddess would celebrate the entire month and not just the day. I normally get the month kicked off a little bit earlier, but I got sidelined by an injury earlier this month that made me not want to do much of anything.

Normally I try to use my birthday as a time to give back to my devoted fans with a freebie or a sale, but this time I’ve decided to go with something a little bit different. Shortly, I’m releasing the first of a series called “Tessa Teaches Trance” (many props to one of my boys for coming up with that title!) How is this a way of giving back? I’ll explain…

I’ve been struggling recently with a hidden frustration. I am a hypno-fetishist and by that I mean that I am a person whose primary sexual turnon comes from the element of hypnosis and/or mind control in my romantic and sexual life. As a hypnofetishist, the hypnosis is everything to me. If you’re familiar with my sessions, then you already know that my inductions often exceed the end game content timewise. While hypnotic roleplay is fun, I really only get excited about creating a session if I feel that I am creeping into your mind and pulling the strings. To be frank, that is what gets me off and that is why I love my job. The frustration comes into play when I receive custom requests that say “Don’t worry about a fancy induction. I don’t want to waste too much time on the hypnosis part.” or the occasional email that lets me know that my session would have been perfect is that induction was just a little bit shorter. These are the things that make me wonder why someone would spend any time investing in this fetish if they don’t actually care about being hypnotized. I get that the fantasy of being helplessly hypnotized by a sexy woman may very well be as hot to some as actually being hypnotized by a sexy woman, but I think my main frustration lies in the fact that it seems that more and more people only seem to focus on what this session may make one do.

The light at the end of the tunnel for me lies at the other end of the spectrum. There are those that desperately want to achieve trance and for one reason or another, don’t find themselves as deep in hypnotic oblivion as they would like to be. I decided to take the time to create a series for those that are willing to do the work and on top of that, I’m offering these at a ridiculously low price. I want everyone to experience trance. I want everyone to love this fetish just as much as I do. I want to hypnotize you.

I’ll be releasing four parts and spacing them out a bit as I want you to spend time with these files and not just burn through them. What does this mean for my boys that already trance well? I’d still recommend the series as you can never go too deep. There are also some other new releases sprinkled in between these sessions for wicked fun!

Back to the birthday talk! This has already been a fantastic month for this birthday girl. Between the gifts, flowers, tributes, Tessa-themed stories, and donations to my favorite animal shelter, this month has been epic! I also noticed last night that some amazingly fantastic hypnotized boy decided that a 70″ TV would be a great present to grab off my wish list. I don’t know who sent that yet until it comes, but here’s a “OMG! Are you kidding me? Is this real? Thank you so much!!!!!!” in advance!

I’ll be a little bit off the grid on my birthday week as I’ll be attending the opera, 2 concerts, and a comedy show all in the course of 6 days! That’s on top of a weekender to Lake Tahoe for some relaxation, hypno-fun and of course a little blackjack.